New Understanding & Hope for Children on the Autism Spectrum – Part 2

In our previous article, Part 1, we discussed the importance of shifting from “fixing” to “connecting” when trying to help the child with autism spectrum disorder (ASD) and ways to begin doing so. We also discussed that the brain is an information system and its job is to put order in the disorder and make sense out of the nonsense. The way the brain gets its information is through perception of differences in the stimulation that comes to it through the senses. The child with ASD has challenges in noticing and perceiving differences; thus he or she often cannot make sense of the world the way the rest of us do. Read Part 1, the full article, here.

3 Essentials to Help Your Child’s Brain

Here are three ways you can help your child’s brain to get better at perceiving differences, thus learning and improving right away. These ways, or what I call the Essentials, are supported by the neuroscience of brain change, or what’s also called brain plasticity.* 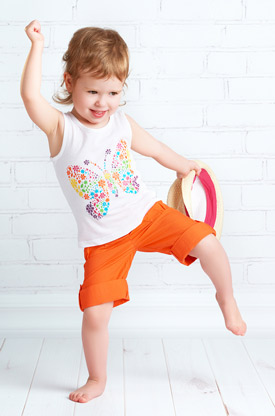 Is your child, like so many children with ASD, somewhat clumsy? Have poor posture? Poor balance? Seems to be a bit lost in space?

What I have discovered over many years of working with children with ASD is that they have movement challenges because they so often don’t feel themselves clearly enough as they move. As a result, their brain cannot develop refined connections with their body, connections that are necessary for high level motor control and space perception to develop.

The good news is that the most immediate and powerful way to communicate with another person is through his or her own movement. But movement alone is not enough to bring about the kind of dramatic changes we know are possible.

It is the attention to the feeling of self, as we move, that gets the brain to notice differences and to very rapidly create new connections, greater differentiation and improved abilities—both physical and cognitive.

When your child moves—any movement will do—look to gently bring her attention to herself and to what she feels as she moves. For example, you can touch her arm as she swings it, perhaps swing with it, and perhaps say “swinging, swinging…” while the movement is taking place. You can look to slow the movement down a bit, then go a bit faster; you can touch her arm and then stop touching it while it moves.

Don’t worry whether it’s working or not. Keep finding opportunities to gently direct your child’s attention to notice and feel her movement.

Do not tell your child to pay attention. Instead, through touch, words, and even imitation, increase the likelihood that he will notice himself moving and begin feeling more of himself.

Remember to stay away from trying to “fix” your child while you do it. Avoid trying to correct behaviors. Use the movements your child is already doing.

Watch this video to see the power of movement with attention.

Slowing down is a powerful way to get the brain’s attention and give your child the time and opportunity to notice differences that otherwise he or she wouldn’t. And remember, a difference that is not perceived does not exist and the brain does not have new information to learn with.

Fast we can only do what we already know—that which is already grooved in deeply in the brain. Children with ASD tend to have powerfully grooved patterns, i.e., compulsion and perseveration that interfere with spontaneous learning and growth.

Find opportunities to gently slow yourself and your child down. Start by matching your child’s speed, be it in movement, talking, or anything else. Then either speed it up a bit first, if your child is speedy, and then slow it down. Remember to avoid the temptation to correct your child, or to try and “fix” him or her.

Simply introduce slow and observe the changes. They can be quite amazing.

When we vary, we create differences. The brain thrives with variations. Variations create a flow of new information in the brain making it smarter and helping it become the brilliant brain it is built to be. 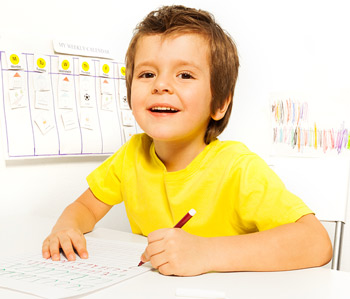 Often times when attempting to have the child with ASD learn something new, be it motor, cognitive or behavioral, the tendency is to try to have him do it in “the right way.”

This approach deprives the brain from getting the information it has to have in order to be able to create something new.

A great way to create variations is to ask your child to do something in the “wrong” way, and then in another “wrong” way.

This turns it into play, into discovery, and into recovery.

The Story of Ari

Ari was 8 years old when his mother brought him to us the first time. He had many of the typical symptoms of ASD. Ari also had great challenges in learning to read and write. “It was a mess” as his mom said.

In an attempt to help Ari have his writing be better organized on the page, he was asked to write letters (which he did very poorly too) inside a sequence of square shapes. In other words, the teachers reduced the variability in an attempt to get Ari to do it “right.” Ari kept failing.

First I asked Ari to write the worst letter A he could. He stared at me and said: “You are kidding me.” I replied, “No, I am not.” He went through a few variations on a bad letter “A.”

I then drew a square on the page. Ari held his breath. He already knew to expect to fail. Then I asked him to write any letter of his choice, and then I told him to make sure that part of the letter is in the box, and part is out of the box.

Ari took a while. He was thinking. And then, very deliberately he drew the letter partly in and partly out of the box.

That evening Ari spent an hour-and-a-half writing letters between two lines perfectly, and no one asked him to.

Once you free yourself from the expectation and need to have your child perform “correctly,” variations become a magnificent, intentionally playful way to free your child to access their own intelligence. And the outcomes are often miraculous.

Read about the experience of Sawyer’s dad.

Bring these three Essentials into the daily life of your child and witness your child becoming happier, and more and more the brilliant learner he or she can be.

Attend one of our free NeuroMovement presentations or workshops.

*Supporting Research for the Essentials

Movement With Attention
In their experiments on monkeys Randy Nudo his colleagues demonstrated a clear correlation between the power of attention (to the feeling of the movement being done) and the brain’s ability to change itself: Only when required to focus on developing a skill to retrieve their food pellets were changes seen in representation of the required action in the Motor cortex.

Slow
Slowing down is an absolute requirement for the brain to change and learn something new. This was spectacularly demonstrated by Michael Merzenich and Paula Tallal who developed a training program for language impaired and learning disabled children called Fast ForWord. In this program children learn to identify speech sounds at significantly slower speeds than they occur in normal language. The speed is gradually increased. A national U.S. field trial study for Fast ForWord followed five hundred children at thirty-five sites found out that the average child who took the program moved ahead 1.8 years of language development in six weeks! Another study 452 students had similar findings;

Variation
A study published in Nature Neuroscience shows that training individuals with ASD to acquire new information by repeating the information actually harms their ability to apply that learned knowledge to other situations. This finding, by an international research team, challenges the popular educational approaches designed for ASD individuals that focus on repetition and drills.

Researcher Melissa A. Schilling and colleagues found a similar outcome with adults who were taught a strategic game. The group that was provided with variations performed significantly better than the group that practiced only the game they were learning. The group with variations also learned significantly faster! Schilling, MA, Vidal P, Ployhart RE, Marangoni A. 2003. Learning by doing something else: Variation, relatedness, and the learning curve. Management Science 49(1): 39–56.