Skip to content
Story of Sophia: A Child with Hypoxic Ischemic Encephalopathy

Story of Sophia – A Child with Hypoxic Ischemic Encephalopathy (HIE) 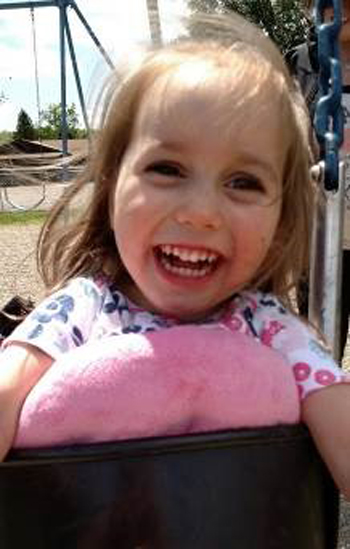 I found out that Anat Baniel Method [ABM NeuroMovement] existed when Sophia was 5 weeks old and still in the Neonatal Intensive Care Unit. I was researching on the internet to find out what HIE was. This was the term I kept hearing doctors and nurses saying, but nobody was explaining what it meant. I looked it up and found out it meant Hypoxic Ischemic Encephalopathy, which essentially means brain injury. During my search I found a group of parents who also had children with HIE. It was one of these parents that told me about this Method.

After talking to that parent and hearing her experience, I wanted to give it a try. Sophia was released after 43 days in the NICU, and we scheduled our first appointment for a block of lessons when she was just under 3 months old.

We were in our lesson for about 10 minutes, and I started to notice Sophia was able to track objects and Jon, our practitioner’s face. This was amazing because she really wasn’t using her right eye at all. I also noticed Sophia was allowing Jon to touch her and move her without crying. Previously every time she was picked up or her position was changed she would cry. Sophia also could not handle to much noise; really almost everything was too much for her.

After her first block of lessons, it was like Sophia woke up to her surroundings and started making sense of her world. She was calm and content and I was able to connect with her on a whole new level. It was so beautiful to see someone who really saw my child. The therapists we had seen previously didn’t really see Sophia or her potential. They were nice but they just didn’t see her; they saw her limitations.

Over the next several months we continued to see Jon, and Sophia continued to transform. Her vision went from a 3 on the CVI (cortical vision impairment) scale to 7.5 out of 10. Sophia’s opthalmologist told me she now doesn’t think that Sophia will have much of a vision problem. This is after a very long list of diagnosis, like nystigmas, strambismus, and much more. We were asked to patch and possibly do surgery to correct her eye, but we didn’t have to after ABM NeuroMovement.

Some of the other changes have been: tolerating the car, rolling from side to side, holding her head up more, following instructions, and reaching for toys. And most recently at 2 years old she began eating some food by mouth, after only eating by a gtube since she was 5 weeks old.

We experienced such amazing changes that I decided to take the training myself to find out how this Method works. It has been so rewarding for myself and my family. I can’t wait to share this work with those in my community!
—Jennifer Riggs, Sophia’s Mom

We have been doing ABM NeuroMovement lessons with Sophia since she was just a few months old. Instantly, I saw a difference in her eyes. She was very aware of her surroundings and seemed much more relaxed in regards to her spasticity. As we continued the lessons, she became even more aware of her body and her movements.

I can immediately tell when she has had lessons by the way she is more relaxed and moves with purpose. Her involuntary movements are reduced and her tone is greatly improved.

I am amazed every time she has a block of lessons.

Learn more about how NeuroMovement can help brain injuries.

Discover a New Career with our ABMI Practitioner Training Program.

Jennifer Riggs is now a Certified ABM NeuroMovement® Practitioner in Ohio. You can contact Jennifer at  513-543-5527.