Skip to content
Story of Kaipo: A Boy with Cerebral Palsy and Cortical Visual Impairment 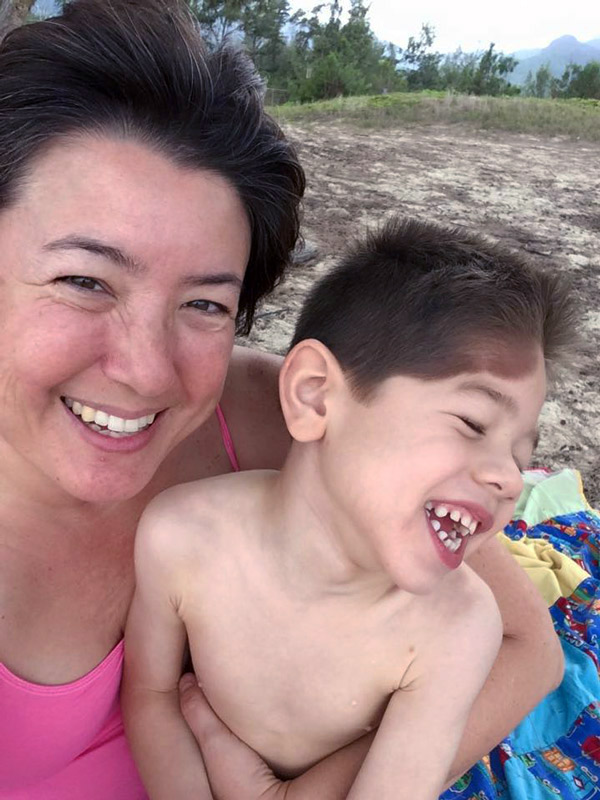 Kaipo Keaulii was born on May 11, 2010, after a normal, healthy pregnancy and under normal, healthy conditions. At the age of 7 months, however, he contracted the virus RSV which caused a heart failure episode and seizures, resulting in brain damage. He is diagnosed with cerebral palsy and cortical visual impairment.

Kaipo was placed in Early Intervention soon after discharge from the hospital and began physical therapy sessions twice a week with Leeward Early Childhood Services, as well as monthly physical therapy sessions at Tripler Army Medical Center. With their help over the next eighteen months, he was able to regain the skills he had lost: holding his head up, rolling front to back and back to front, and propping himself on his elbows in the prone position. However, he was not able to advance beyond these skills.

Frustrated with the lack of progression past these skills, and wondering what the future of my child could look like, I started reading books on cerebral palsy and physical therapy. One night, I went to YouTube and searched for “cerebral palsy” and found a video of Anat Baniel working with a boy, Carter, with cerebral palsy. The transformation that happened literally before my eyes was astounding. I quickly googled “Anat Baniel” and found her website and contacted them for a referral to an Anat Baniel Method (ABM) NeuroMovement Practitioner in Hawaii. Unfortunately, that person had moved away from Hawaii to Washington.

Since we were planning a trip to Tucson, Arizona, to visit family, I got a referral to a certified Practitioner in Tucson and we scheduled three sessions with her. She connected me with another Practitioner who visits Hawaii each year and we were able to schedule sessions with her, as well as other Practitioners that have come to Hawaii for working vacations. We have also taken Kaipo to the Anat Baniel Method Center in San Rafael for lessons with Anat and her staff.

One of the most noticeable changes was the uncrossing of his eyes. After he came home from the hospital, he preferred to keep his eyes closed most of the time and when they were open, they were often looking in different directions – one eye turned in while the other looked around. After a week-long “intensive” session with Anat and her team, we saw that his eyes had “uncrossed” and were focusing and moving in tandem. Since then, he has kept his eyes open while awake and is using his vision to look for objects. His vision is still not perfect, and his peripheral vision appears to be best so he often turns his head to the side or looks out the side of his eyes. But he is able to locate a toy and reach for it with success.

As we’ve learned with this method, there is no “big change” or “small change” – only “change.” How big or small it is depends on your expectation.

Other progress he’s made includes:

And each of these changes are celebrated, because it proves he can change and he can learn, which is what Anat Baniel Method NeuroMovement is all about.

He is truly a happy child.

Learn More about how NeuroMovement can help cerebral palsy.

Discover a New Career with our ABMI Practitioner Training Program.

Mika Keauli is a Certified ABM NeuroMovement® Practitioner in Oahu, Hawaii. You can contact Mika at www.sandbox-hawaii.com or call 808-721-1773.