Turning the Child on the Autism Spectrum Into a Brilliant Learner 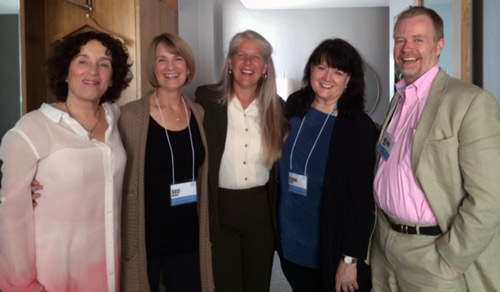 Neil Sharp and I recently got back from the AutismOne Conference in Chicago, Illinois. Jill Bolte Taylor also attended the conference, as well as Anat Baniel Method® (ABM) NeuroMovement®Practitioners Suzi Marks and Claire Conley who came to support us. It was wonderful to have them all there.

The conference was an incredible experience! As always, the parents and their children are my heroes.

The presentation was called NeuroMovement®: Tools for Taking Advantage of the Remarkable Capacities of the Brain to Change, Turning the Child on the Autism Spectrum into a Brilliant Learner.

For me, the highlight of the presentation was when I got to work with a 9-month-old boy who had limited movement and could not roll over. Within a few minutes of working with him, he rolled over and lifted his head. I urged the mom to stop tummy time (you know me) and suggested she get some ABM NeuroMovement lessons from our practitioners Suzi or Claire. (You may be interested in reading my previous blog post: Why Not Tummy Time.)

I also worked with a young man with locked-in syndrome during one session. “Locked-in syndrome, or LIS for short, is a condition in which a patient is aware and awake but cannot move or communicate verbally due to complete paralysis of nearly all voluntary muscles in the body except for the eyes.” (Source is Wikipedia: http://en.wikipedia.org/wiki/Locked-in_syndrome.) He had an incredible nurse who was able to communicate with him through eye movements so that he could formulate full sentences and communicate.

I gave this young man with locked-in syndrome a hands-on lesson in his wheelchair and I had no idea if I could reach him. In the beginning when I attempted to gently move him, his body felt like there was no life in it. And then, after a few moments of me continuing to communicate with him through movement, he started responding and changing.

It became very clear that I did indeed reach him. His head stopped being pulled to the left involuntarily, his hip joints became mobile, and his breathing became fuller. His legs became lighter and I was able to lift them more and more. His arms became less spastic…

We don’t know whether these kinds of changes will translate into his ability to begin moving himself. However, these changes convinced me that it is well worth a try. It was a very moving experience.

If you are interested in viewing more videos from the AutismOne Conference, you can go to the following link: www.autismone.org/conferencevideos.

I will also be presenting this topic at another upcoming Autism Conference:

I’d love to hear about your experiences and any feedback you want to share on our presentation. Please join us on social media.